Can You Control the Message in a World of Fake News?

Can you control the message in a world of fake news?

The truth is becoming harder to uncover, so the question is, can you control the message in a world of fake news? This is an issue which speaks to all brands, from individuals in their private life, to celebrities and politicians and equally from not-for-profits to businesses. Everyone is at risk of suﬀering at the hands of rumours and lies. You can be crucified in social media before you even know something is being said about you.

The role of social media 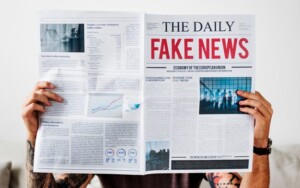 Social media is only to blame for the ease in which we allow things to happen. The fact is, every one of us has been involved in a situation where someone has said something about us which is not true. When it is in a small group, the situation is manageable, and the real ‘truth can set you free’. It is when you bring social media and the web in general into the picture that control disappears.

One statement can go viral in an instant. You can change a message on a Wikipedia page, or put out an article that is automatically assumed to be true. Once a ‘fake’ version is out there the damage it can do can be severe. What makes it even worse is not knowing where you can go for a definitive source?

Media can be dangerous

We often blindly put faith in a narrative we have heard over and over and/or journalists who themselves have been too time pressured to consider their words or source.

My blog is not about politics, but to display the consequences for a brand, I want to venture into dangerous territory. In this example, the brand is Israel, a country celebrating its 70th birthday amid renewed hostilities following the moving of the US embassy to Jerusalem.

The unrest is happening in Gaza a place most media refer to as ‘occupied territories’. It is a term we have heard over and over, so much so that most people blindly accept it as truth. Quite simply the term is wrong. Gaza has less reason to be referred to as an occupied territory than Australia. The indigenous population could refer to the current inhabitants of this country as occupiers. The claims to Gaza and Jerusalem undeniably go back to the Jewish people. Any claims made by others come in periods following.

The truth about this region is so littered with deceit, most buy straight into what is being presented without scratching the surface. We see pictures on our screen of a mother holding a dead child and we blame one side because of the region. If the same thing happened in Australia we would start by asking, why was a mother going to a protest which was always going to turn violent. A proper investigation might also ask about the well being of the child prior to the protest.

The headlines tore Ivanka Trump to shreds for opening the Embassy while “people were dying” nearby. Protest is an easy word to use to label a gathering of people seemingly trying to voice an opinion. However, what needs to be considered is the diﬀerence between a protest we would see in Australia versus sending people who have been whipped into a frenzy if hatred with knives in their pockets wanting to penetrate fences to cause harm to innocent civilians not necessarily living or working nearby.

The headlines could so easily have read, ‘violent extremists suﬀer their own consequences’. I am not suggesting that should be the headline, but the truth is, had the same event occurred in Australia it is probably the gist of what we would have read.

Dig a little deeper into the UN and you will uncover the ongoing desire to manipulate and control the messages about the region by the Arab countries. If you are interested in the politics I encourage you to watch the US Ambassador to the UN speak on this subject.

The consequences for you

If you are not monitoring what is being said about you online, you are risking sever consequences. It amazes me how many businesses (and restaurants are often most guilty) fail to read and respond to reviews online. While reviews are usually written by people who have something bad to say, you can’t leave them alone, because they will always be there. What’s more what is published is not only sometimes fake, so you might actually learn about an issue, and then be able to fix it.

It is more important than ever to be clear and consistent in your messages. If you have a strong brand presence, controlling fake news is much easier. The more authentic your brand is, the easier it is to be believed when someone says something bad or just wrong about you.

Let me bring this last example closer to home. Three Australian cricketers found themselves banned for up to a year. Limited details about the investigation into their actions have been published, but we have drawn our own conclusions. For two it was ok to cry at a press conference but for the other it was not. For the two who travelled without having to worry about having children, we cried over their reaction. For one who had a wife and two young children to consider, we attacked. The fact is David Warner’s brand has been about ‘tough no-nonsense take it to them’. His challenge is challenge is to change this narrative.

Fake news is not new

We have all experienced what happens when we are not in control of a message and the consequences it can bring.

There are so many truisms here:

A brand can so easily be damaged