Not-for-profit definition is a problem

Whether a not-for-profit is a charity or not is only part of the question.  The trouble is the just released ‘draft‘ definition by the Treasury is only answering this question. 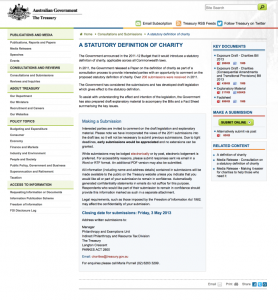 Who would have thought it would take so many pages to define a charity.  It does make for an interesting and seemingly comprehensive read.

I am not going to cover all the technicalities of this proposed definition, but it does appear to cover most all possibilities of what should be referred to as a ‘charity’.  The reality has been there is a great deal of confusion as to what qualifies as a charity, not-for-profit (NFP), nonprofit, Non Government Organisation (NGO) or benevolent institution.  You can be one of these or several of them.  Herein lies the problem that the Treasury definition is hoping to solve so that future legislation and regulations can be clearer.

The only real drama I have with it is the terminology it uses right at the front, “a not-for-profit entity”.  This to me is the real term that not only needs further defining, it needs to be changed or better still struck off.  When you look at the bottom of page 15 of the explanatory material on the charities bill, there  is a reference to the 1997 Income Tax Act which explains a not-for-profit.

One of the biggest issues I have with all the changes happening in the not-for-profit sector is that they are largely being led by Treasury, The Tax Department and financial organisations like CPA Australia  and PWC.  The focus of the new Australian Charities and Not-For Profits Commission (ACNC) is around regulation by numbers.  It is ultimately all about regulatory compliance in reporting.  I have no issue with this, just that the focus is only on the numbers.

The term not-for-profit is a massive weight around the neck of every ‘charity’ – no matter how you define them.  Literally it means you are not making a profit.  According to the Act it does qualify this to say not distributing ‘profits to owners or members’.  The problem is there is zero education about this.  The term is confusing and misleading.  A not-for-profit does and should return a profit on any product or service it delivers.  Like any business they need to make money to survive.  Successful not-for-profit organisations do not and can not survive purely on the basis of donation and grants.  They make a profit to help fund administration, services and future growth.  The difference is the profit is kept within the organisation and is not distributed.  In other words there are clear rules around the distribution of wealth.

The Tax Act is correct, but nobody understands or will ever take them time to read it.  The consequences are, most everyone believes not-for-profit means everything is done at cost or for free.  They think it means you should not be making money from a product or service.  They think it means you should where possible ask only of everyone (no matter their personal financial situation) to pay the minimum to cover costs.

This is a massive issue that is being overlooked.  This mentality that a not-for-profit should not be in the business of making money only increases the dependence of organisations on government and therefore the tax payer.  Staff working for a not-for-profit also suffer because they are seen to be working just for the love it without market value reimbursement for their services.

The negative connotations attached to the term not-for-profit is holding back public understanding and it is driving organisations that will endanger their long term survival in what is becoming an increasingly crowded market place.

Charities struggle with telling donors that not all the money they give can go into direct service provision.  The reason has much to do with the connotations attached to the term not-for-profit.  Explaining that, part of a donation helps fund the best staff to administer services and part also goes towards investments to assist with long term sustainability, is essential.

Please do not define a charity as being a not-for-profit.  That term must disappear because it is holding organisations and the public back.  The meaning though technically correct in the Act is not how it is more broadly understood.

Not-for-profit is the problem term.  The perception of what it means does not match the definition.  It would simply be better to talk about restriction around the ‘distribution of wealth’ and not mention the term not-for-profit at all.

Love to hear from anyone who has some suggestions on an alternative term.