The end of year business dilemma

The end of year business dilemma is the end of year sales, Christmas sales, holiday sales…everywhere sales. It is easy to get wrapped up in these common tactics. Throw in the entry of Amazon into the market, and businesses are increasingly finding themselves at a crossroads. How can they make money and compete?

So what do you do when you are feeling pressured by the end of the year? 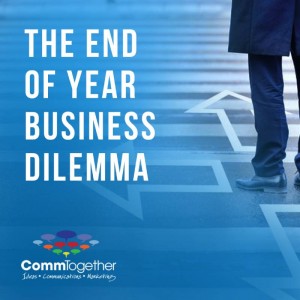 The interesting thing about the end of the year is it creates artificial deadlines for most businesses. If you are selling things which fall into the potential holiday gift category, the end of the year is important, but most do not. Don’t make rash decisions because you said you wanted this done in 2017. It may be stating the obvious but moving from 31 December to 1 January is just a day. Other than the date (which changes every day anyway), nothing has changed.

Use the end of the year to take a closer look at your business. Could your brand story be modified to modify your audiences? For some, it might be about better targeting to get more from a select base, while for others it might able about expanding the reach. Don’t assume or be forced into playing the game the big boys play. They don’t have to write the rules for your business.

The secret to solving the end of year business dilemma most likely lies in your communications and marketing. For most businesses, this is an area which lies in neglect most of the year and then suddenly your react and hurriedly role out campaigns without consideration for their longer-term implications.

Don’t be a victim. Now is a chance to be considered, because the deadlines don’t really matter, but the future of your business does.